A number of years ago when I met my wife I also met her two dogs.

Yukon (a boy husky lab mix aka a Huskador) and Kiva (a girl chocolate lab).

They became my two closest companions.

For about three years they have been coming to work with me.

Anyone who trains with me knows that as soon as you walk up to the door you will see two joyful pups with all the excitement in the world beaming from their eyes and tails.

Both of the dogs thrive on seeing all the familiar faces enter the gym each week to give them their pets, hugs, and a few throws of the toy.

When I get ready to leave for work, they know my routine.

As soon as they recognize the work routine, the excitement starts.

While I love both dogs dearly, from the start I took a special liking to Yukon.

Not only was he athletic, playful, and energetic, but more importantly he was the most kind and gentle soul of any creature I had ever met.

He was a rescue dog when my wife got him and he had all the love in the world to give.

He would never get gruff or mean to anyone, only loving.

Before I met my wife she had taken him through therapy dog classes so he is actually a trained therapy dog.

He would not lick or get in your face as he was trained not to.

He always carried a peacefulness about him that would instantly calm you and make you slow down.

But oh did he love to play.

He slowed down a bit in the last couple of years, but when I met him he was as fast as lightning and very strong. He kept right up with his sister Kiva.

Yukon had a very soft brilliant silver fur coat that I brushed weekly. Often times that still wasn’t enough as he seemed to have a never ending supply of fur.

His favorite thing to play was Frisbee. He loved playing with his soft Kong Frisbee to the very last day.

He would never ask to stop and would keep bringing it back no matter how many times you threw it.

He loved to chase it into the water too. He would swim out to it, grab it and swim back to you.

Yukon loved the water and snow in the winter as well. We often took him on winter hikes in the snow through the woods. He really liked that.

He also loved cruising aboard his boat fittingly named “Yukon’s Fun Ship”. He would stand at the front door of the boat as we drove and guide the way as his big floppy ears flapped in the wind.

Let me give it to you straight: Yukon is the best dog in the history of the world and he always will be.

Now for the bad part.

Yukon was put to rest on Friday.

I am actually writing most of this on Friday as he lays beside me because I know there is no way I could do it after the fact. 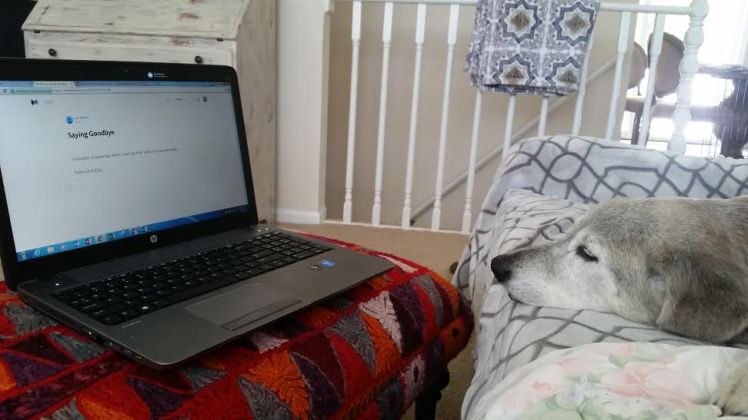 The last few months has been difficult for him.

But, true love for a pet is about being there for them after its become inconvenient for them to be around.

To be honest, if it were not for the gym, I think this would have happened at least a year ago.

The gym made him SO happy.

He had clients to see and greet and he knew that.

There were people counting on him and that got him up every morning.

If you compare that with being left at home every day you can see why I am certain him coming to work with me extended his life greatly.

The people in the world that live to be 100 all have the same trait in common in that they are given purpose in their life and have people counting on them to some degree. I feel that this same concept applies to Yukon.

He lived to be almost 15 years old so probably close to 100 in human years.

Yukon gave to everyone.

Most dogs are very needy and only want things from you.

He simply wanted to give his love and would just stand or sit next to you for as long as you wanted.

When clients would enter the gym he stood by them as they entered and was ready to give them a greeting and whatever love they needed.

I feel like he knew he was a rescue dog and wanted to give back as much as he possibly could.

His spirit carried him through this last year and it was a great one.

Yukon can help remind us all about life.

What is going to matter in the end is not all of the people you knew, but rather the people who will carry a sense of loss within them when you are gone.

Yukon had a positive impact on a tremendous amount of people and for that I am truly grateful. I am proud to know that a large number of people will miss my best friend just as I do.

I will give him a hug and pet from all of you.

I took the day off of work today so we could spend it doing his favorite things.

Yukon took a nap in my bed while I showered to start his day.

Next, we went for a walk around the neighborhood this morning then played Frisbee for quite awhile.

After that we took a brief rest while I wrote this and now we are off to the park to go for a walk through the woods on the trails.

From the park we are going to stop to get Yukon some vanilla frozen yogurt. He loves that. Then some more Frisbee and of course tons of hugs and pets.

Although he will be leaving soon, I know his spirit and great memories will live on forever.

You were never a burden Yukon. As tears well in my eyes and I stumble to good-byes — I also realize — your pain is now gone.

Run, jump, and swim as much as you want now buddy. You will never hurt again.

I will always love you, Yukon.

***To my clients: Because I don’t prefer to cry in front of all of you I would rather not talk about this. At least for the time being. Thank you.